EARLY MONDAY MORNING A HOME ASSOCIATED WITH DODD DRILLING, LLC WAS PAINTED WITH SLOGANS INCLUDING “DODD DRILLING STAY OUT”, “STOP COP CITY”, AND “DROP APD” TO THE DODD DRILLING JERK: LAST MONDAY, A BULLDOZER WITH YOUR LOGO FORCED ITS WAY INTO WEELAUNEE FOREST AND LEFT A 100-FT TRAIL OF DESTRUCTION IN ITS WAKE. FOREST DEFENDERS RESPONDED QUICKLY WITH ROCKS AND RAGE, BUT SOME DAMAGE WAS ALREADY DONE. DESPITE HAVING NO PERMIT, YOU ALLOWED ATLANTA POLICE TO USE YOUR EQUIPMENT TO INTIMIDATE AND INJURE THE FOREST AND ITS RESIDENTS. TODAY, YOU KNOW WHAT IT’S LIKE TO HAVE YOUR SPACE INVADED. YOU CAME TO OUR HOME SO WE CAME TO YOURS. ALL FORESTS ARE CONNECTED–YOUR PRIVATE PROPERTY IS NOT AS PRIVATE AS YOU MAY THINK. WE DEMAND YOU STAY OUT OF WEELAUNEE FOREST AND STOP WORKING WITH ATLANTA POLICE AND COP CITY CONTRACTORS. TO ALL OTHERS WHO WOULD SUPPORT COP CITY: IT MIGHT HAVE MORE COSTS THAN YOU ANTICIPATE, FINANCIAL AND OTHERWISE. MANY CREATURES CARE DEEPLY ABOUT THIS FOREST AND ARE PREPARED TO DEFEND IT. ANY PARTNER OF THE APD OR CONTRACTOR FOR COP CITY IS OUR ENEMY AND POTENTIAL TARGET. TO OTHER INTERESTED PARTIES: THE PRINCIPAL ADDRESS OF DODD DRILLING, LLC IS A SUBURBAN HOME IN A CUL DE SAC LOCATED AT 64 TIMBER WALK DAWSONVILLE, GA 30534. THE BACKYARD INCLUDES A LOVELY FOREST WHICH IS EASY TO VISIT. THE WEELAUNEE FOREST IS NOT DYING; IT IS BEING KILLED AND THOSE WHO ARE KILLING IT HAVE NAMES AND ADDRESSES. A LIST OF LOCAL ATLANTA EVIL-DOERS IS AVAILABLE AT STOPREEVESYOUNG.COM. ~SOME SEXXII FOREST FAIRIES

At 9:30am today, people inhabiting the Weelaunee Forest woke to the sounds of destruction. 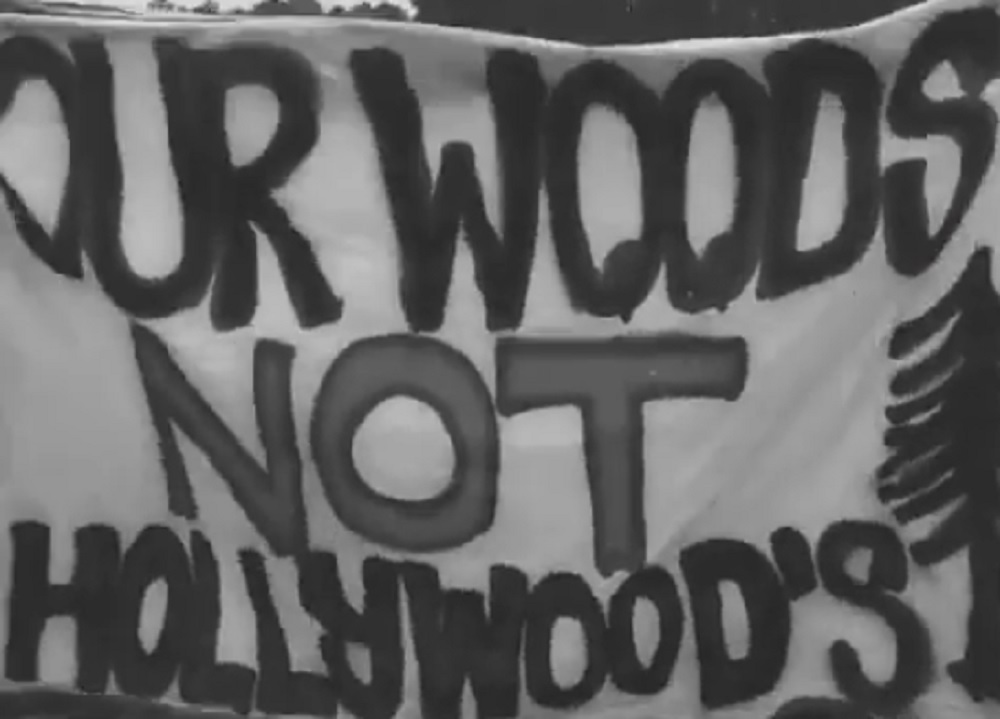 On December 17, a group of demonstrators blocked the entrance to and hexed Blackhall Studios, the movie studio attempting to destroy 100s of acres of the Atlanta forest. Video submitted anonymously. #nocopcity #defendtheatlantaforest #nohollywooddystopia 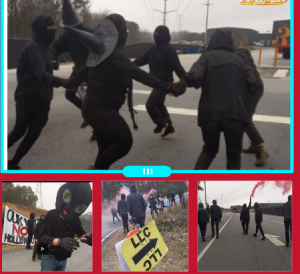 “Early on the dewey morning of Friday Dec. 17th, 2021, an affinity group of various Land Defender’s comprised of festive folk in witche’s hats, a reindeer costume, & comrades clad with drums, colorful smoke, & a banner reading, “Our Woods Not Hollywood’s” stormed the gates of Blackhall Studios with the express purpose of shattering their sense of security, blocking their entrance with fiesty folly, & sending a message to them that if they do not rescind their plans to “swap” approximately 53 acres of their land with the publicly owned Dekalb County Intrenchment Creek Park & thus clear cut the forest to build what would be the World’s largest (& most Unnecessary!) sound stage, that they would be met with the utmost resistance!
Iconic spells for destruction were loudly chanted in Black Hall’s general direction, as the witch-block held hands, cackled,& Skipped in a Sun-wise direction blocking Blackhall Studio’s main entrance, smoke torches were lit, Dancing Reindeer burned Amerikkkan flags, parking cones were thrown in the middle of the road, all the while Land Defenders demanded that workers, “Bring Forth Ryan Millsap!” The (recently ex) CEO of Blackhall Studios…
If nothing else be remembered of this damp & dubious morn, let it be known a spell cast to create havoc FOR Blackhall was sworn!
“Our Woods Not Hollywood’s,” means Blackhall needs to back the fuck off & get the fuck out of the Southside Atlanta Forest & Intrenchment Creek Park, as the woods belongs to the people, the amphibians, the migratory birds, the snakes & fish– & they will eat Milsap as a holiday dish, he if neglects the forest creatures’ wish!
Furthermore, approximately one hour post Witch-block antics, Dekalb County Police responded to a call made by Blackhall Studio’s stating that they, “followed the protestors into the woods, & deduced an encampment they came upon must belong to the apparent witches, & thus the police worked in TANDEM with Blackhall Studios to have the Forest Defense Encampment REMOVED from “their” land… Obviously the land is Muscogee Land ancestrally, not Blackhall’s, & currently a lawsuit exists to uphold an agreement stating that Intrenchment Creek Park was left in perpetuity for the people…
Though no arrests were made, & moving items from the encampment was eventually negotiated by Land Defenders, let it ALSO be known that this is farrrrr from the end of the struggle, for it has just begun! And remember that one can often gauge the effectiveness of their actions by measuring the police response & repression to it, so it can be safely said the Witch Block action of Dec. 17th DEFINITELY shattered the sense of security at Blackhall Studios, as it should!
We are here to stop BOTH Blackhall & Atlanta police from destroying the forest to further create the fake metaverse Hollywood glamorizes, & fake cities the kkkops build to train murdering in…
We are a strong movement thousands deep, & we ain’t going anywhere!
#DefendTheForest #StopBlackhallStudios
#StopCopCity”

Received anonymously over email, uploaded to Twitter dot com because of size

wanted to see the reality of the destruction talked about in the communique from May 17th, so went walking with my camera. 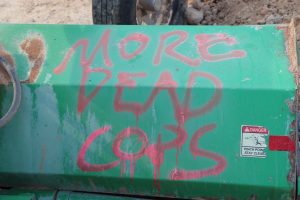 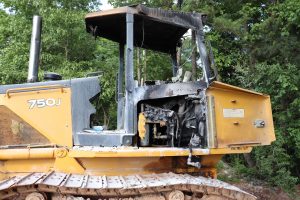 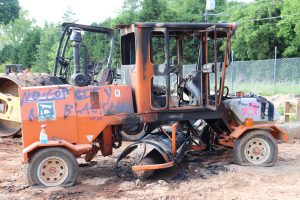 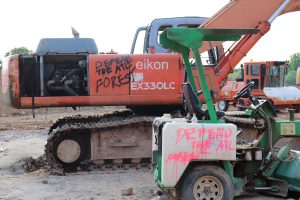 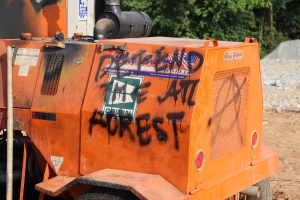 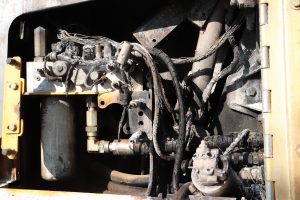